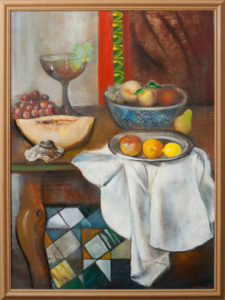 Miroslav Hanák – paintings of nudes, landscapes and still lifes
“In my opinion a picture should be something agreeable, cheerful and nice, yes – nice! In life there are too many unpleasant things for us not to produce abominations.” These pertinent words had been said by Auguste Renoir, the famous French painter of the second half of the 19th and the beginning of the 20th centuries.

Academic painter Miroslav Hanák had probably taken some of these words of Renoir to heart before he started his artistic career. The pictures of nudes, landscapes and still lifes that he presents fulfil the words of the great impressionist and not only that. In the contemporary period of naturalism, expression and abstraction, they bring the so much needed caress in the honey-coloured golden colours of his landscapes and still lifes, they turn to the European and also Czech paintings of the 19th and the first half of the 20th centuries, from which they derive and to which they in many respects return, but sometimes even much further, e.g. to the Renaissance, mainly in figural motifs and compositions. He likes Cézanne but also Dutchmen, and his fluffy and trembling brushwork proves that painting is for him an activity which makes for a full component of his visual perception. This is painting with a strong lyrical charge. This lyrically sensual conception of the world, so much obvious especially in landscape motifs, gradually changes in the sphere of figural painting and reaches the sphere of imaginative visions. In the pictures of nudes he now and then fortifies the shivery contour of his landscapes with a line that tightens the volume of the figure. Miroslav Hanák likes to depict the beauties of a woman´s body and he knows how to do it well, but he also paints portraits and figural compositions.

Still lifes are then for the painter a composition of colours, volumes and light, the light which, by the way, fills all his pictures to the full and which, together with its colourfulness, is that carrier of joy and freshness, so much typical of Hanák´s paintings. They evoke a little bit the Dutch paintings of the 17th century, but also still life paintings in the 1930s. Both in the portrait and the figural and landscape paintings and in the still life paintings as well, Miroslav Hanák managed to create during his artistic activity a fully authentic painting style which is distinguishable at first sight and full both of its own characteristic colourfulness and poetic conception.

However, Hanák´s paintings also have a certain spiritual measure, which is noticeable in landscapes but mainly in figural pictures. He paints pictures hiding a strong and secret feeling, melancholy of beautiful spring and autumn days and a certain vision which sometimes takes hold of our mind and makes it restless. They are veiled in a hardly describable secret, and the author himself is likely to assume more than perceive them when he is painting a picture.

As Giorgio de Chirico used to say: “The shadow of a man walking in the sunshine is much more mysterious than all the past, present and also future religions.”

Today, Miroslav Hanák belongs to not too many painters prolonging the quality artistic creation directed in this way, which has found its place at many international exhibitions, e.g. in Frankfurt am Main (Germany), in Basel (Switzerland) at an international fair of contemporary art, and in Yokohama (Japan) at an international show of the world´s creation, where he exhibited. All this says much, beside other things, for the high quality of his artistic work as well as for its authenticity and contribution to the Czech contemporary art of painting.